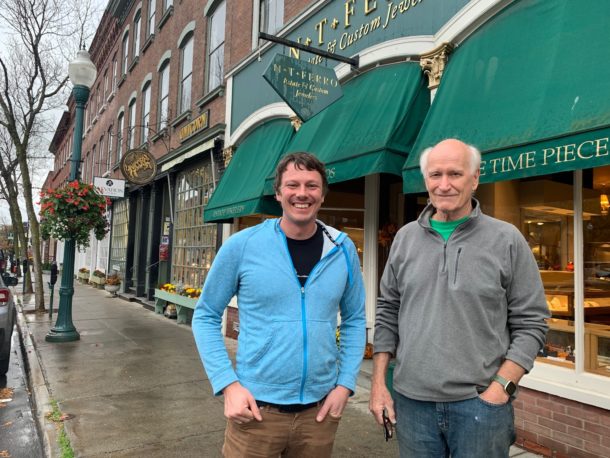 With $30,000 in seed money, three Woodstock business leaders have helped create Startup Woodstock, a pitch competition that will help launch a new business.

“The idea is, the closer the company is to solving some critical need within the community, that’s a big plus,” said Cliff Johnson, one of Startup Woodstock’s organizers and judges.

Johnson moved with his family from Atlanta to Woodstock during the pandemic. More than a decade ago, while working in Portland, Oregon, he founded Vacasa, an international vacation rental management company, which he left in 2018.

Johnson is organizing the Woodstock competition with Jon Spector and Larry Niles, both members of the town’s Economic Development Commission, which focuses on issues such as housing, child care and downtown revitalization. The commission provided $10,000 for the competition, and the additional $20,000 came from private donors.

“We really want people to come here,” Niles said. “We’re gonna do everything we can to solve some of these very obvious problems, or barriers, to opening up a business.”

High rents downtown contribute to the barriers, Niles said, along with the perception that Woodstock has a difficult-to-navigate bureaucracy for prospective business owners. While the former may be true, he refuted the latter, saying nearly all the business owners surveyed by the commission reported having positive experiences with local government.

Niles also rejects the idea that Woodstock caters only to a certain clientele.

“I always cringe at the thought that we’re just a rich town,” he said, “because we’re made up of a lot of tradespeople and a lot of people that have lived here all their lives.”

With that in mind, Niles and Johnson said Startup Woodstock hopes to cast a wide net in recruiting potential applicants for the prize money. People whose ideas may only be in their infancy are invited to apply. So are service-based businesses such as electric, landscaping and child care companies.

The competition’s criteria require the business to fill an unmet gap in the community and, hopefully, create living-wage jobs or a sustainable owner-operated business.

If successful, Johnson said he hopes the competition will create “a culture of entrepreneurship and (allow) people to create their own destiny.”

Johnson imagines that sort of culture could grow in Woodstock. He moved to Vermont to raise his family, relishing Woodstock’s school system, tight-knit community and access to the outdoors. He works remotely, and sees the Windsor County vacation destination as a draw for more remote workers like him.

For a town of only about 3,000 people, Woodstock devotes substantial resources to economic development. Since 2016, the town’s Economic Development Commission has given out over $1 million in grants supporting events, physical infrastructure, marketing and other initiatives.

This year, the town government created a program paying landlords to convert short-term rentals to long-term rentals. The program aims to ease the town’s housing shortage, made more acute because of the village’s allure to tourists. Property owners received $3,000 if they agreed to a one-year lease with a tenant, and $7,000 for a two-year lease.

Johnson acknowledged that “concerns that come when a community gets more vacation rentals coming in,” including through Vacasa, adding that short-term rentals may be a “minor contributing factor to housing affordability.”

Still, he believes vacation rentals can be a “positive part of most communities” when they are licensed, taxed and following local regulations.

Though it’s a new idea, Startup Woodstock could grow if it proves successful, according to organizers. Applicants can apply until Dec. 1, at which point a to-be-announced panel of judges will narrow the field to a group of finalists by Dec. 15. Those finalists will present their ideas in February, and a winner will be chosen soon thereafter.

Want to stay on top of the latest business news? Sign up here to get a weekly email on all of VTDigger’s reporting on local companies and economic trends. And check out our new Business section here.

Did you know VTDigger is a nonprofit?

Our journalism is made possible by member donations. If you value what we do, please contribute and help keep this vital resource accessible to all.