SBA wants to add fintechs to its biggest lending program

SBA wants to add fintechs to its biggest lending program 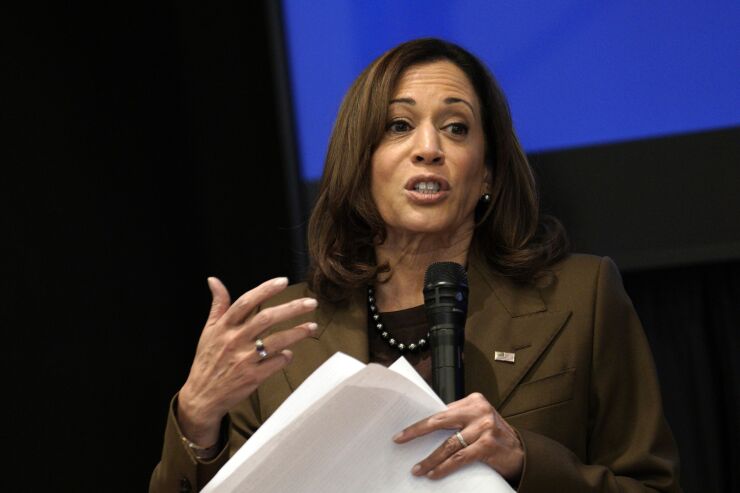 In what would be a major policy change, the Small Business Administration appears set to lift a 40-year moratorium on participation in the flagship 7(a) program by nondepository lenders.

Since 1982, President Ronald Reagan’s second year in office, the SBA has capped the number of nonbank, noncredit union institutions permitted to make 7(a) loans at 14. In an email Tuesday, Christalyn Solomon, an agency public affairs specialist, wrote that the SBA will soon unveil a notice of proposed rulemaking (NPRM) authorizing additional small-business development companies to seek 7(a) licenses.

Plans to open 7(a) to fintechs and other nondepository lenders were first disclosed by Vice President Kamala Harris this month in an appearance at the annual Freedman’s Bank Forum in Washington. According to a fact sheet prepared by the vice president’s staff, ending the moratorium would spur more small-dollar 7(a) loans, benefiting entrepreneurs from disadvantaged communities, who frequently seek smaller sums of capital than other small-business borrowers.

“The SBA’s objective for this policy change is to grow the number of lenders that receive its loan guarantee, thus increasing small-business lending, particularly in smaller-dollar and underserved markets,” the fact sheet stated.

The 7(a) program, under which the SBA guarantees up to 85% of loans made by private-sector lenders, is the agency’s largest. More than 1,600 lenders made nearly 48,000 small-business loans totaling $25.7 billion in the 2022 fiscal year, which ended Sept. 30. The moratorium has ensured the lion’s share of that funding is reserved for banks and credit unions.

Excluding the 2021 fiscal year, when the SBA slashed fees and offered to pay several months of loan payments for borrowers in the wake of the COVID pandemic, the 2022 fiscal year was 7(a)’s  biggest year ever.

After initially being shut out, nondepository lenders were permitted to participate in the Paycheck Protection Program, which was included under the the 7(a) umbrella but managed by the Department of the Treasury in partnership with the SBA. According to some accounts, however, fintechs were responsible for a disproportionate amount of PPP fraud.

Fintech lenders are pointing to a study conducted this month by the Federal Reserve Bank of Philadelphia and the Bank for International Settlements that found nondepository lenders have been more active in leveraging alternative credit data in their underwriting, allowing them to reach more underserved borrowers. Serving disadvantaged communities has emerged as a major priority for SBA Administrator Isabella Casillas Guzman, who last year proposed giving the SBA a direct role in making loans of $250,000 or less in a bid to broaden access to 7(a).

While Guzman’s direct-lending plans floundered after encountering strong resistance from banks and credit unions, as well as Republican lawmakers in Congress, there appears to be more support for fintech participation in 7(a). In July, a bipartisan group of lawmakers including Sen. John Hickenlooper, D-Colo., and Sen. Tim Scott, R-S.C., reaffirmed their support for a bill introduced in August 2021 that would end the moratorium and permit more nondepository lenders to participate in 7(a). Reps. Byron Donalds, R-Fla., and Jason Crow, D-Colo., introduced a similar bill in the House.

Fintech lenders have expressed support for the SBA’s planned rule, as well as for recent legislation that has opened the door for more access to 7(a) for nondepository lenders.

“Funding Circle applauds the Biden Administration, along with Sens. Tim Scott and John Hickenlooper, and Reps. Byron Donalds and Jason Crow for working on this bipartisan, bicameral solution to help expand access to capital for America’s smallest and underserved businesses,” Ryan Metcalf, head of public policy and social impact at Funding Circle US, said in a press release.