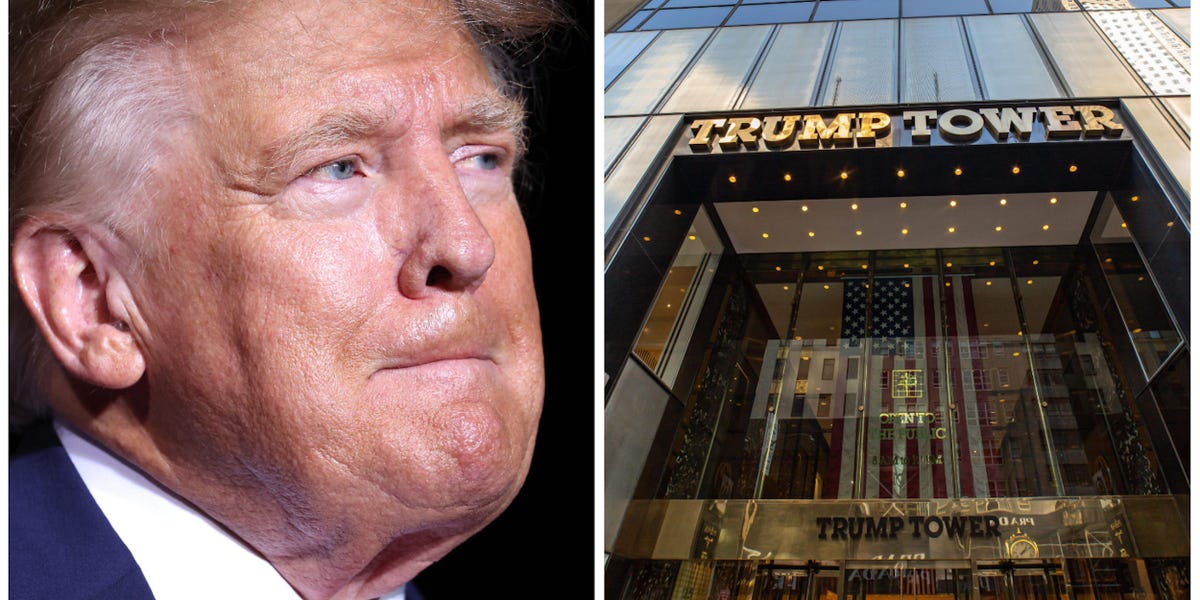 Thanks for signing up!

Access your favorite topics in a personalized feed while you’re on the go.

Donald Trump’s real-estate and golf-resort empire goes on trial in Manhattan on Monday, in a low-level corporate fraud case with high financial stakes, including millions in potential fines and tax penalties.

But there’s another threatened cost, and it’s something government spending watchdogs have been urging for years.

Conviction could prompt the government to bar the Trump Organization from doing business as a federal contractor, including cutting off the spigot of Trump’s lucrative — and critics say exorbitant — billing of Secret Service agents who stay at his properties while protecting the former president and his family.

Trump is hardly the ideal government contractor as it is, watchdogs say, after his many brushes with fraud allegations and given federal regulations requiring “an impeccable standard of conduct.”

Those regulations also recommend “debarment,” or blacklisting, of any company convicted of such business-related crimes as “forgery, bribery, falsification or destruction of records, making false statements [and] tax evasion.”

A conviction in this payroll tax-fraud trial would only increase calls to blacklist Trump, according to Steven L. Schooner, who teaches government procurement law at George Washington University Law School.

Schooner has complained stridently over the years as the feds continued to do business with Trump despite two impeachments, an inauguration scandal, questions over his Trump International Hotel in DC, and the forced dissolution of Trump University and the Trump Foundation by the same New York attorney general’s office now alleging he pocketed $250 million through financial fraud.

Add to that the recent news that the Trump Organization had billed the Secret Service more than $ 1.4 million to stay at Trump properties during the former president’s time in office.

The Secret Service paid Trump as much as $1,185 per night for a single room at his DC hotel, and once signed a $179,000 contract for golf cart rentals at his golf resort in Bedminster, New Jersey.

“The rules that apply to typical government contractors have never applied to Trump Organization, and frankly, that’s the most depressing and pernicious aspect of this pathetic saga,” Schooner said.

“It’s as mind-boggling as it is heart-breaking,” he said of the government’s apparent unwillingness to stop stuffing taxpayer dollars into Trump’s pocket.

The jury that will be chosen in a downtown Manhattan courtroom starting Monday will determine if the Trump Organization defrauded tax authorities by paying executives some of their compensation off the books, in the form of untaxed perks like free apartments and cars.

Former Trump CFO Allen Weisselberg will be the key prosecution witness against the company after pleading guilty to the tax-dodge scheme in August.

Weisselberg admitted pocketing $1.7 million in tax-free perks over 15 years, including Mercedes-Benz luxury cars for him and his wife, free use of Trump-branded apartments on Manhattan’s Hudson River and tuition for his grandkids’ private schools.

At the Trump Organization headquarters in Trump Tower on Fifth Avenue, the cars, apartments and tuition were considered part of Weisselberg’s $940,000-a-year income, prosecutors allege.

The Trump Organization is charged with knowingly and repeatedly filing inaccurate tax documents to avoid payroll taxes on that extra compensation, saving money for the company and its executives.

As part of his plea, Weisselberg, who remains on the company payroll as an adviser, must pay back $2 million and serve five months jail.

The Trump Organization could face stiff tax penalties plus up to $1.6 million in fines, Reuters has calculated, if convicted of the three tax-fraud counts and six other counts in their indictment — all of them low-level felonies.

Their lawyers have countered that the Manhattan District Attorney’s office — for decades run by Democrats — is pursuing a penny-ante fringe benefits case out of political bias against Trump, an argument the trial judge, state Supreme Court Justice Juan Merchan, has barred the defense from raising at trial.

A case for ‘debarment’

The recent Secret Service billing revelations and the trial starting in Manhattan have upped the ante for those calling for an end to Trump’s government contracts.

“The Trump Organization was essentially gouging the federal government and federal taxpayers” said Noah Bookbinder, president of Citizens for Responsibility and Ethics in Washington.

“If there’s a criminal conviction, it’s hard to imagine how the federal government could at that point not debar them,” he told Insider.

Bookbinder and Schooner, the procurement law professor, formally wrote the government asking it to cut ties with Trump’s company and its senior officers in October 2021.

Their letter was addressed to the federal General Services Administration, which oversees contracts, and government agencies that that have done business with Trump, including the Department of Homeland Security, which oversees the Secret Service.

“Our position hasn’t changed,” said Sean Moultin, senior policy analyst for the Project on Government Oversight, another ethics and accountability watchdog group that signed on to the letter.

“A conviction of the organization on any of the charges would make debarment a foregone conclusion,” he told Insider.

Reps for the Trump Organization and the GSA did not respond to Insider’s requests for comment.

A spokesperson for the Secret Service would not speculate on a potential Trump Organization debarment, saying only that the agency would be responding directly to the congressional investigation into Trump’s billing.

Under federal acquisition regulations, an agency can continue to use a blacklisted company by saying they have “compelling reasons justifying continued business dealings between that agency and the contractor.”

In the case of the Secret Service, that compelling reason would be the difficulty in protecting Trump and his family without staying at whichever of his resorts he’s currently living at — including his winter favorite, Mar-a-Lago in Palm Beach, Florida, and his summer favorite, the Trump National Golf Club in Bedminster, New Jersey.

“The agency can simply say they need the contractor,” explained Schooner.

Barring the unlikelihood of a cash-free solution — Trump letting the Secret Service “stay at our properties for free,” as Eric Trump once promised, or forgoing Secret Service protection voluntarily, as Richard Nixon did —  Trump’s Secret Service spigot may well remain open, watchdogs acknowledge.

Still, blacklisting Trump could tamp down on such extravagances as that $179,000 golf cart rental contract. And it would prevent future self-dealing in other types of contracts.

The Secret Service “may be able to make some sort of claim that they are in a unique situation,” in needing to be close to the former president, said POGO’s Moultin.

“But I still remember when Trump was pitching holding a G-7 conference at one of his properties, Moultin said.

In 2019, acting White House chief of staff Mick Mulvaney announced the US would host the 2020 G-7 summit at the Trump National Doral golf resort in Miami, an idea quickly abandoned after critics accused the then-president of self-dealing and other ethics violations.

That same year, then-Vice President Mike Pence stayed at a Trump hotel during a trip to Ireland that was located 180 miles from any of his official engagements, and Air Force crews were revealed to be enjoying lodging at Trump’s luxury golf resort in Scotland.

“That’s where I think a debarment would still come into play.”